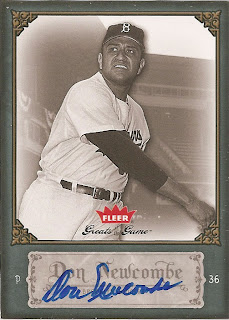 Who is this? former Brooklyn Dodgers pitcher Don Newcombe
What is this? An autographed insert card from the 2006 Fleer Greats of the Game set
Where'd I get it? I purchased it from a dealer at a local card show.
How much did it cost? Not sure... between $10 & $15.

Why is this so special? Newcombe grew up in Elizabeth, New Jersey and went to school not far from where I work. He still lives in the Garden State.

Newcombe pitched for the Negro League's Newark Eagles before signing with the Brooklyn Dodgers. He made his major league debut in 1949, winning the National League Rookie of the Year award and getting selected to the All-Star team. He would go to three more All-Star Games and win the National League MVP and Cy Young Awards in 1956 when he went 27-7.

Newcombe spent two seasons in the military during the Korean War. He left Major League Baseball with a 149-90 career record, a lifetime 3.56 ERA, 1129 strikeouts. He also had a .271 career batting average and 15 home runs. Newcombe pitched one season in Japan with the Chunichi Dragons before retiring in 1962.

Newcombe has a beautiful autograph, and Fleer designed a great card to showcase it.
Posted by Paul Hadsall at 6:30 AM

Don Newcombe lived in Colonia, NJ during the 1950's. In fact, the house was located either on the site of the Colonia Natural Pharmacy or the Bank of America(former First Bank of Colonia)on Inman Avenue. We would often gather in front of the house to see him. He had to work a regular job in those days.