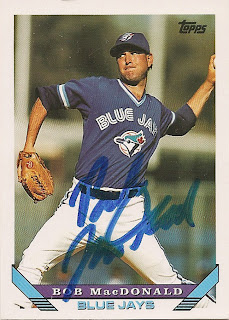 Who is this? Former Toronto Blue Jays reliever Bob MacDonald
What is this? An autographed card from the 1993 Topps set
Where'd I get it? I wrote to MacDonald at the beginning of November and asked him to sign a few cards for me. I got them back the day after Thanksgiving.
How much did it cost? Not much, beyond the postage.

Why is this so special? MacDonald was born in New Jersey and attended Rutgers University. He spent parts of six seasons in the majors in the 1990s. Though he pitched primarily for the Blue Jays, MacDonald also played for the Mets, Yankees and Tigers. According to his Wikipedia page, MacDonald now manages a semi-pro slow pitch softball team.

MacDonald has a decent signature that would likely be quite nice on a larger item... it seems a bit cramped on the baseball cards he signed for me. Here are the other two: 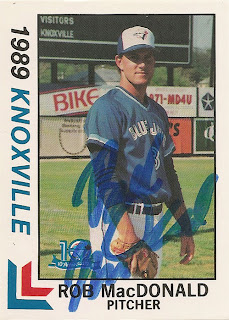 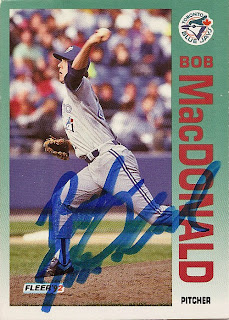