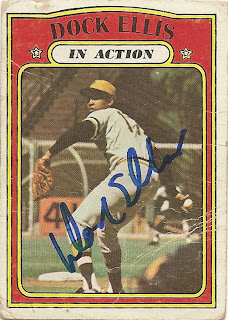 Who is this? Former Pittsburgh Pirates pitcher Dock Ellis
What is this? An autographed card from the 1972 Topps set
Where'd I get it? In a trade with Dion, of Dion's IP Autos Only


Why is this so special? Dock Ellis is one of the more colorful characters in baseball history.

He threw a no-hitter in 1970 and later claimed that he was under the influence of LSD at the time.

In 1974, he was pulled from a start against the Reds after five batters. He hit Pete Rose, Joe Morgan and Dan Driessen to start the game. Tony Perez managed to dodge four balls out of the strikezone, and Danny Murtaugh pulled him after Ellis threw errant pitches to Johnny Bench. Ellis later said that he was trying to send a message to the Reds in response to some comments made during spring training.

Somebody cast a vote for Ellis to enter the Hall of Fame in 1985. He definitely belongs in baseball's Hall of Characters. Ellis died in 2008 while awaiting a liver transplant.

Dock Ellis' signature is not very pretty, but it is fairly legible.
Posted by Paul Hadsall at 6:12 AM