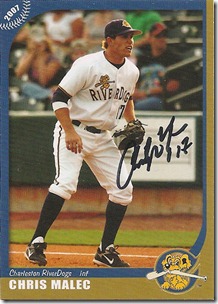 Who is this? Camden Riversharks infielder Chris Malec

What is this? An autographed card from the 2007 Charleston River Dogs team set

Where'd I get it? Malec signed it at a Newark Bears game this summer


Why is this so special? The New York Yankees selected Malec out of UC-Santa Barbara in the 16th round of the 2005 draft. He played in their farm system for five seasons, making it all the way to AAA.

I met Malec when he played for the Trenton Thunder in 2009, and he seemed like a nice guy who appreciated the fans. That carried over when he joined the Camden Riversharks in the independent Atlantic League this season.

I am impressed by Malec’s careful, tiny signature. I also like the cute logo on the River Dogs card.