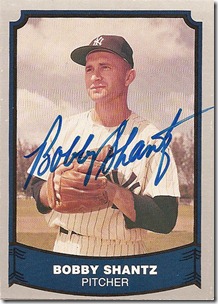 Who is this? Former New York Yankees pitcher Bobby Shantz

What is this? An autographed card from the 1988 Pacific Legends set

Where'd I get it? I bought it at a baseball card show last month

Why is this so special? Bobby Shantz was born in Pottstown, Pa. – the same town where my father grew up.

In 1952, he went 24-7 with a 2.48 ERA. In 33 starts, Shantz pitched a remarkable 27 complete games. He won the AL Sporting News Pitcher of the Year Award and the American League MVP. Amazingly, another pitcher – Allie Reynolds – was the runner-up. Mickey Mantle was the only position player to win a first place vote.

Shantz also won 8 Gold Gloves and was a three-time All-Star.

Shantz seems to enjoy signing autographs through the mail – he generally responds to requests sent to his Ambler, Pa. home in about a week. Unlike many modern ballplayers, you can even read his signature.