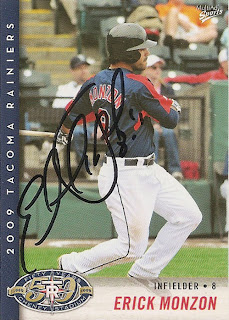 Who is this? Long Island Ducks infielder Erick Monzon
What is this? An autographed card from the 2009 Tacoma Rainiers team set
Where'd I get it? I got the card signed before a Newark Bears game this summer
How much did it cost? The card was a gift from a friend who visited the Tacoma Rainiers ballpark in 2009.


Why is this so special? Erick Monzon was drafted out of high school by the Texas Rangers in 1999, but he  did not sign. Instead, he went to the University of Tampa and signed with the Seattle Mariners as an undrafted free agent.

Monzon played at every level in the Mariners' system from 2004-2009, but it seems as though he was regarded more as a utility infielder who could provide roster depth than a real prospect. This season, spent with the Long Island Ducks, was the first time he played in 100 games for one team and only the second time he played that many in one season.

Monzon's autograph is interesting... while it is pretty complicated, it is not very legible.
Posted by Paul Hadsall at 6:27 AM