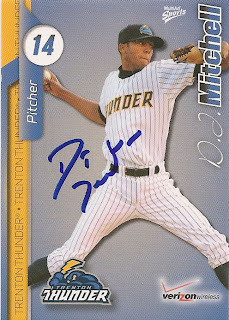 
Why is this so special? Mitchell, a 10th round draft pick in 2008, was one of the better-regarded prospects on the Trenton Thunder team this year. He had an 11-4 record with a 4.06 ERA in 23 games before earning a promotion to AA.

I'm not sure if this was a quick version because he was rushed, or if this is Mitchell's normal autograph. It's not especially pretty, either way.
Posted by Paul Hadsall at 6:35 AM