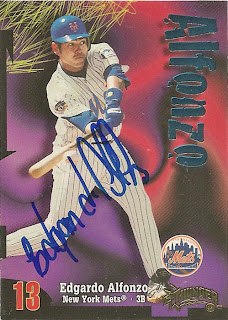 Who is this? Former New York Mets infielder Edgardo Alfonzo
What is this? An autographed card from the 1998 Skybox Thunder set
Where'd I get it? Alfonzo signed it before a Newark Bears game this summer
How much did it cost? A quarter?

Why is this so special? Edgardo Alfonzo remains one of the best players in Mets history. He ranks among the top ten career leaders in team history in most offensive categories. Alfonzo won a Silver Slugger in 1999 and was an All-Star in 2000.

After leaving the Mets, he had some decent seasons in San Francisco and brief stops with the Angels and Blue Jays. He left Major League Baseball with over 1500 hits, 146 home runs and 744 RBI over a 12 year career.

Over the past few years, he's played in Mexico and Japan, as well as independent league baseball in the U.S. After a disappointing 2010 season where Alfonzo hit .154 (12-for-78) in 26 games for the Newark Bears, I wonder if he's finally ready to retire.

Alfonzo's signature has remained fairly consistent throughout his career, but I've never quite figured out why he compresses his last name together the way he does.
Posted by Paul Hadsall at 6:48 AM