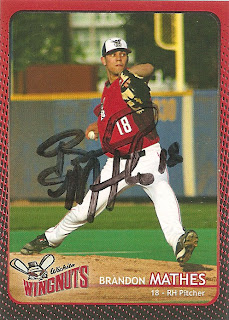 
Why is this so special? Last week, I received an unexpected package from Zach at Autographed Cards. It contained a 2010 Wichita Wingnuts team set, with about half of the cards signed. This was a great surprise, and I want to thank Zach for sending it.

The Wingnuts team set is one of the more unique ones I've seen. I'd have to go back to the early 80s to find cards printed on thinner stock, but the photography is generally better than I've seen in some of the Atlantic League sets that I buy. There are some really odd shots, but I'll leave that for when we come to them. (Whenever that is - I'm working through my folder of card scans, but there are still 100 more left to post.)

Mathes made his professional debut with the Joliet Jackhammers in the Northern League last year. He made one start, but it didn't go well. This year, he pitched for Wichita in the American Association. He was 2-2 with a 4.35 ERA in 33 games, mostly out of the bullpen.

Mathes signature is a bit unusual, with the letters very close together and overlapping to some extent.
Posted by Paul Hadsall at 6:29 AM

I'm glad you liked the set!

I guess the Nuts sign autographs (if they want) after every Friday home game. I got the set on the final home Friday game of the season and it looked like Brandon was using a Sharpie that came out of a box in April. It was well used.

Brandon actually went to college in Salina, Kansas (my hometown). I had no idea about that until the day they gave the cards away. A girl at work asked me if he was still on the team and I told her that there was no one on the team that went to Kansas Weslyan. Then when I saw that card, I was shocked when I flipped it over and that was about all they talked about on the back. I guess that shows what I know.

That's neat. I always enjoy finding out that there's a local connection.

Thanks again for sending the set. I think tomorrow's card is another one from it, but then I've got some major league stars to finish things out as I get back to players whose first names star with the letter "D" :) (Maybe I will get to Zach Stewart by the time spring training starts)

I don't know who Zach Stewart is, but he sounds like a stand-up guy :)

I'll be honest, I don't know that much about him either - he's a pitcher in the Blue Jays system, and the other autograph seekers were more excited to see him than Kyle Drabek on the day that I got the card signed.