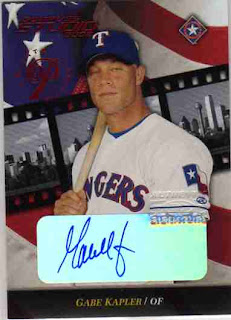 Who is this? Rangers outfielder Gabe Kapler.

Where'd I get it? I don't really know. Might have been a pack.

How much did it cost? No clue.

Why is this so special? It's not really surprising that Donruss went with the American Flag motif in 2002, it was pretty popular that year for some reason. It's a good looking set though, and Donruss did a few parallel sets (Donruss do parallel sets? No way!) that were autographed. This is one of those parallel sets, noted by the red foil logo, the serial numbering, the autograph sticker and notary public stamp on top of the sticker. Kapler is a decent fourth outfielder who is infamous for his many his shirtless photos on the interwebs. He had his best years with the Rangers before bouncing around to Colorado and Boston. After winning a championship with The Sox in '04, he signed to play in Japan, but got cut and was back in Boston late in the year. Kapler retired in 2006 and managed in the minors last year, but is attempting a comeback with the Brewers in '08. If he makes the team, the Brew crew will have two "Hebrew Hammers" patrolling the outfield with Kapler and Rookie of the Year Ryan Braun. Kapler is known as a tough player and good guy. This is a nice looking auto of a cool player, but it looks like Gabe forgot to finish out his last name. 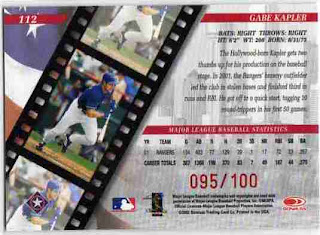 I really thought Kapler would make be a really solid player. But he had injuries and consitency problems and that was that. I wish him luck.