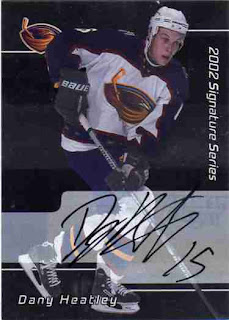 Who is this? Senators winger Dany Heatley.

Why is this so special? I don't have any racing autographs so here's a hockey one instead. Dany is a big reason why I don't really follow hockey anymore. He was my absolute favorite player from the second the Thrashers drafted him. I remember when he was drafted - I was stuck at work and following the draft online. I was disappointed because I wanted the Thrashers to pick Dany and they had the second pick. The Islanders unexpectedly picked goalie Rick DiPietro instead of Dany and I was dancing in the cubes. Then came the accident, the lockout and all of a sudden he was gone. Off to lousy Ottawa. This is a "first signature card" and Dany's a superstar so it's probably worth some money, but to be honest I don't give a crap about it anymore. It'll probably go back in my hockey box to collect dust. Bummer of a post eh? Sorry about that, I thought this would be a cool card to post when I pulled it but I'm apparently more pissed off at the NHL then I realized. I'll post something nice tomorrow. 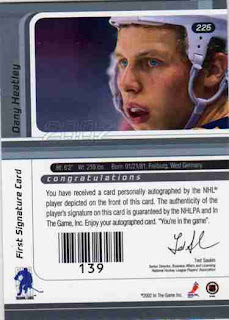 Email ThisBlogThis!Share to TwitterShare to FacebookShare to Pinterest
Labels: 2002, Dany Heatley, In The Game, Senators