Who is this? Red pitcher Phil Dumatrait.

Where'd I get it? In a pack from Wal-Mart.

Why is this so special? I guess this is an example of good karma. I was at Wal-Mart yesterday picking up some bubble mailers to ship off the prizes for my A Pack A Day contest when I got this pack. There was nothing new in the card aisle to be honest and I just grabbed the first pack of this stuff since I was getting run over by people in line for the register. One guy with a trampoline balanced on top of his cart forced me and everyone else in his path to flee the area. I ripped it thinking there could be no way my luck could continue with this set and found this auto. Good things seem to happen out of nowhere whenever I give away cards in these contests, so I think I'll keep doing them. Phil was a first round pick of the Red Sox in 2000 and went to the Reds in a trade for Scott Williamson. Phil has fared well in the minors, but had problems in 6 starts for the Reds last year. in one start on September 9th, he gave up three home runs to the first three batters. Phil was picked up by the Pirates on waivers this offseason and will have to fight for a roster spot in spring training. Phil's signature yearns to break free from the confining autograph space on the front of his '52 Rookie card. 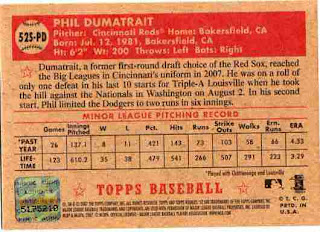 What would it take to pry this card from your warm, live fingers?