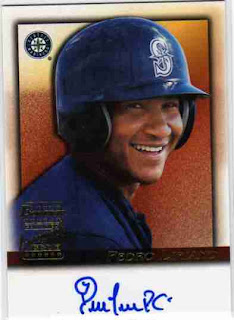 Who is this? Mariners second baseman Pedro Liriano.

What is this? An autograph card from 2001 Bowman, card BA-PL.

Why is this so special? Out of all the Bowman packs I bought in 2001, I didn't get a single Albert Pujols, but I did get this card. It was difficult to find information on this guy, there was a relief pitcher with the same name who pitched for Milwaukee and Philadelphia that kept interfering with my Google searches. The blurb on the back that Pedro hit .400 in the Arizona Fall League eventually helped me to track him down. After a great year for the Wisconsin Timber Rattlers in 2001, He didn't play at all in '02 and only played 43 more games in the minors. I don't know if he got injured or played in an independent league or what, he just sort of fell of the face of the earth. It's a shame too, he's got a really unique signature. The P is especially ornate for a baseball player's autograph, although I'm not sure what the PC- means at the end of the sig. 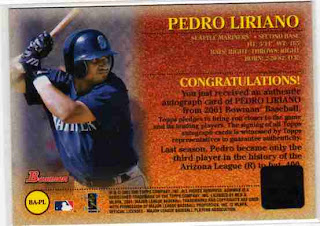