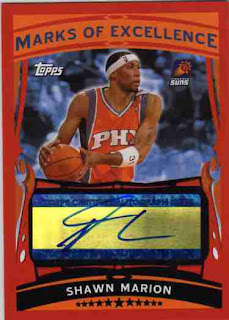 Who is this? Suns forward Shawn Marion.

Where'd I get it? A pack I picked up at QuikTrip because they had no baseball cards.

Why is this so special? I blew it yesterday, so you get a special two-fer today. I used to pick up a pack of cards or two when filling up at the gas station. The past few years they have been kind of erratic with their cards though and they've finally stopped selling them altogether. A lot of times they didn't have baseball cards at all and I'd have to grab some other pack to get my ripping fix. One time I grabbed a pack of Topps Basketball for the heck of it. I opened it up and pulled this card. Not only that, I also pulled this card. That's right, a Shawn Marion and Carmelo Anthony autograph both in the same pack. What are the odds? I was most excited about Melo when I first opened it, but The Matrix is a pretty damn good player in his own right. Shawn was recently traded to the Heat in the Shaquille O'Neal deal. Shawn's signature it atrocious, there isn't even a hint of a S or M in that squiggle. The sticker it is on is different from the other Topps stickers I've see as well. It is gold and blue instead of the holographic silver they normally use. I'm not sure if this is a parallel or what, other than the sticker color it is no different from the Carmelo card. 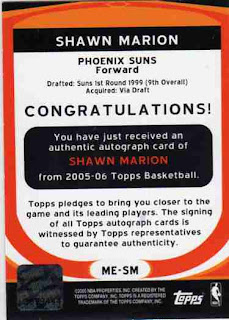