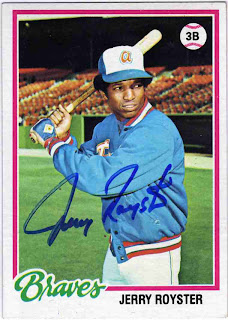 Who is this? Braves infielder Jerry Royster.

Where'd I get it? In a trade with Kris, aka AlbukwirkE.

How much did it cost? Acquired in a trade.

Why is this so special? I helped Kris complete his 2007 A&G set and this card was a surprise in the package he sent me. Kris got a couple cards signed in person last summer and sent me the extra. This is a really sweet auto on a great card. I like the 1978 set if for no other reason than for the game on the back. Jerry's card is a strikeout though. Jerry played for the Braves for 10 years and was on many of the teams I grew up with. He was also on the 1976 Topps All Star Rookie team, maybe he'll get an insert card this year. Jerry became a coach when his playing days were done and has spent many years as a minor league manager. He also managed the Brewers for one year, which was technically not a minor league team at the time. He will be managing the Lotte Giants, and is the first American to manage in the Korean league. 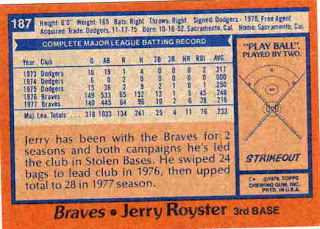