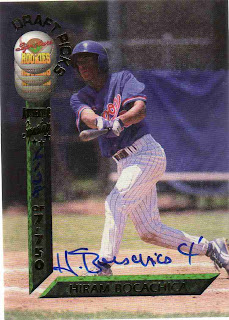 Who is this? Expos prospect Hiram Bocachica.

What is this? An autograph card from 1994 Signature Rookies, card #21.

Where'd I get it? In a pack bought from Atlanta Sports Cards.

How much did it cost? Two bucks for the pack.

Why is this so special? This is the first autograph card I pulled from a pack. It wasn't a surprise, as every pack of these cards had an auto inside. The shop I bought it from had some packs for two bucks each and I bought one. In retrospect I should have bought more at two bucks a pack but I was in college, didn't have a whole lot of cash and wasn't terribly impressed by my pull. I tried following Hiram for a couple of years but he didn't make the show and I lost interest. To my surprise, he finally debuted in 2000 with the Dodgers and he put together an 8 year career in the bigs. He was the fringiest of fringe players to be sure, but he made it and was able to hang around at least. Good for you, Hiram. He will be playing in Japan for the Seibu Lions in 2008. 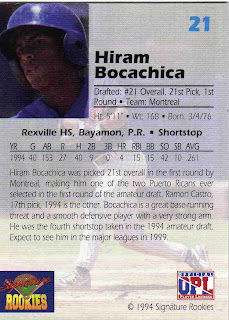