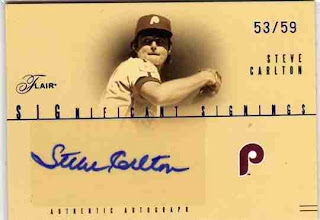 Who is this? Hall of Fame pitcher Steve Carlton.

Where'd I get it? Half-off bin from the local dealer.

Why is this so special? Carlton has been a favorite of mine since the early 80's. I liked the Phillies and Mike Schmidt and I followed Carlton's chase for the home run record closely. I was really bummed when Lefty's career fizzled out with the Twins and Ryan blew past him. The resulting bitterness is probably why I never got all that into the Nolanmania of the early nineties. This card was in the half-off display case with a $30 sticker on it and I couldn't pass it up. The card itself is pretty blah, but it works well enough for an autograph card. Lots of nice, blank space for the autograph sticker. The autograph is pretty slick and it has a low, meaningless serial number. Who buys autograph cards for the serial number anyway? 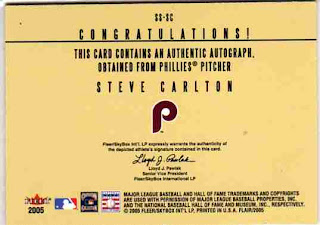 That sticker takes away from the card, though. It would have been much nicer on card.

Yeah, I don't like the clear stickers that much.