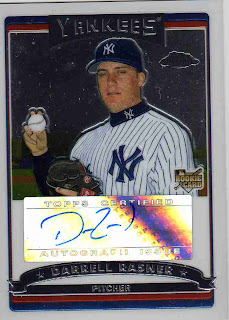 Who is this? Yankees pitcher Darrell Rasner.

Where'd I get it? Bargain bin.

How much did it cost? Not much.

Why is this so special? Originally out of the Expos organization, Rasner started six games for the Yankees last year. While he only went 1-3, he didn't embarrass himself either. Darrell is pretty far down the Yankees' depth chart, but could end up pitching in the bigs somewhere this season. I normally don't mind sticker autos, but they don't really work well on this design. The curve bumps it up into the photo and Topps would have been better off trying to get the sigs on the nice white space available under the photo. Darrell subscribes to the minimalist signature theory, and his auto consists of three lines, a curve, an arc and a backwards s. John Hancock it ain't. 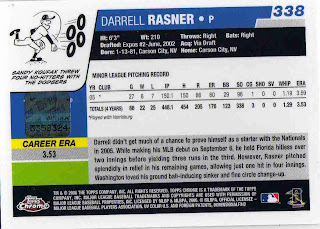