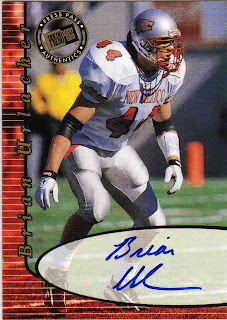 Who is this? Chicago Bears assassin Brian Urlacher.

What is this? An autograph card from 2000 Press Pass.

How much did it cost? 3 bucks for the pack I think.

Why is this so special? It's Brian Freaking Urlacher from his draft year. I was stoked to pull this out of a pack, I thought he would be one of the best players to come out of the draft. I was right! I was really into NFL draft picks sets in the late 90's and bought up a bunch of them at the time. Cards with the players in their college uniforms are pretty cool in my opinion. The past few years though I've given up on them. Three bucks for four cards just isn't a good deal and I have better ways to spend my cash. This sig from Urlacher is pretty sweet, it looks like he started signing when saw some guy carrying a football out of the corner of his eye. He hurried the last name and jumped up to pummel the guy. That'll teach you to carry a football around Urlacher! 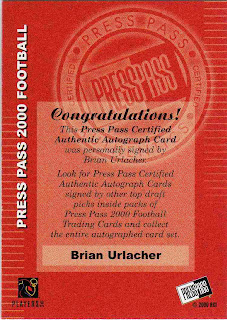