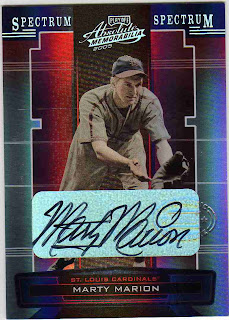 Who is this? Cardinals shortstop Marty Marion.

Where'd I get it? Champion Sports Cards.

Why is this so special? Not to be confused with Marion Motley, Marty Marion was the St. Louis Cardinals' All-Star shortstop during the 40's. Marty was a key player on three Cardinal championship teams including his MVP year of 1944. Marty was a fantastic fielder at short and although his stats don't look that good to modern fans, was a good hitter for a shortstop of his day. Marty wasn't voted into the Hall of Fame, but he got a serious look from the Veteran's committee before they decided to stop letting anyone in. Marty was also part of a double play combination with the man with my favorite name ever, Creepy Crespi. I got this card last week when I went in the the local shop looking for a couple of packs to tide me over until Heritage came out. I found out they had a sale on autographs so I scrounged through their box and found Marty. I couldn't pass it up, and I still don't understand why I got an MVP from the 40's for less than a lot of Double-A scrubs on a "rookie" card. The card looks great, especially as it's a Spectrum holographic parallel, but the signature itself is just fantastic. It's unique, you can read every single letter and it has that brilliant giant dot of the i in Marion. After looking through my collection the past couple of months and seeing a whole bunch of scribbles and hieroglyphs from whippersnappers who couldn't hit a major league curveball if all of Western Civilization depended on it, seeing such a gorgeous autograph is incredibly refreshing. This is instantly one of the prizes of my collection. Thanks Marty! 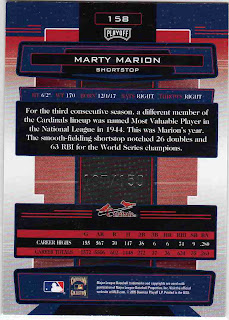 Yes it is a good looking auto. I just don't care for cards that are dark like Spectrum. It is a good design just too dark for my tastes.

That is a gorgeous card.