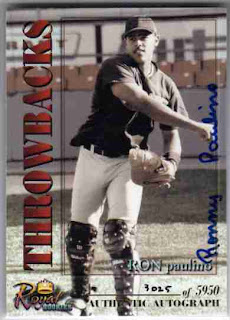 Who is this? Pirates catcher Ronny Paulino.

Where'd I get it? In a large lot off autographs I won in an auction.

How much did it cost? Less than a buck.

Why is this so special? When I first got this card, Ron Paulino was nowhere on the prospect radar as far as I could tell. I filed it away as just another prospect auto that wouldn't pan out. Ron is now the Pirates' starting catcher. It just goes to show you have to be patient with these prospect autos. I can see why prospecting is so popular, it's a nice feeling when you look through your stuff and find a card like this of a minor leaguer who really made it. Ronny turns 27 this year and has the Pirates' catching job all to himself so he's definitely on my Fantasy league sleeper list for 2008. The signature on this card is simply spectacular. Ronny signed it so neatly right up the side of the border. I've never seen anyone else sign quite like that and I just love it. 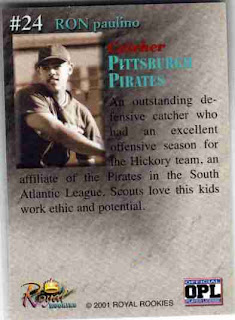 Great blog, too bad I just discovered it now. I have a Luis Saturria auto just like this, and it makes me laugh that back then they literally had to sign nearly 6000 baseball cards [now they just sign stickers and put them on the cards, for shame].