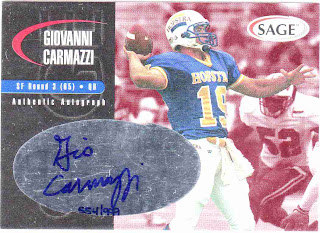 Who is this? 49ers quarterback Giovanni Carmazzi.

Where'd I get it? Bargain bin.

How much did it cost? A buck or so.

Why is this so special? Giovanni was a third round pick of the 49ers who spent a year on the bench without getting into a game. He bounced around NFL Europe and the CFL before retiring in 2005. Carmazzi is considered one of the busts of the 2000 draft, and was taken 134 players before Tom Brady. Giovanni is still a legend at Hofstra at least. SA*GE put their autos on these huge foil stickers that look pretty good on the card, but doesn't scan worth crap. Carmazzi has a simple, readable autograph with no nonsense junking it up. He also shortened his first name to Gio, a wise choice considering he had 999 of these to sign. 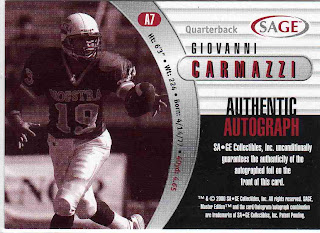