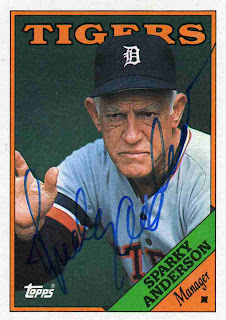 Who is this? Tigers manager Sparky Anderson.

Where'd I get it? In a repack tin from Target.

How much did it cost? Twenty bucks for the tin.

Why is this so special? A few years back Target had these tins filled with baseball cards they were selling alongside the blasters. They advertised one graded card, one autograph card and something like 200 cards for twenty bucks. I decided to try one out and bought it. The 200 cards were utter rubbish, mostly late 80's, early nineties junk if I recall correctly. The graded card was a Cal Ripken Ultra Gold Medallion card graded 10. Not too shabby. This card was the autographed card. When I pulled it I was a little confused, I expected a minor league autograph from Best or Just Minors since they were selling a lot of those at the time. This was really sweet, an auto of a Hall of Fame manager. This is one of his greatest cards too, featuring Sparky in full blown Jedi Mind Trick Mode. I can hear the conversation on the mound now:

Sparky went all out on this autograph too, he used every bit of that card. The card has a little COA sticker on the back, which looks odd on a 1988 Topps card. Still a great card, and completely unexpected from a repack box. 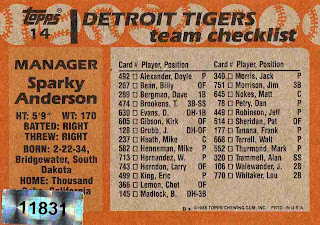 Ever since the movies came out, I thought Sparky looked like an extra from the Lord Of The Rings movies on this card. "You shall not pass!"

Some kind of disgruntled elf wizard or something. I would have said Gandalf, but look at those ears!

I was thinking more along the lines of Yoda, but I can see Lord of the Rings. He kind of looks like an Ent, hoom haroom! Although Ents don't like machines, not even Big Red ones.

I can see Yoda too. I'm exposing too much sci-fi roots.

How dare you show Captain Hook in a Tigers Uniform! It is an outrage!