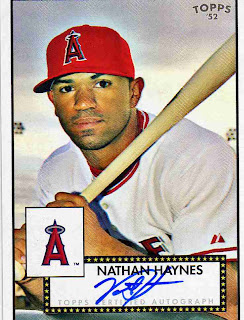 Who is this? Angels outfielder Nathan Haynes.

How much did it cost? Two-fifty for the pack.

Why is this so special? This card was pulled during a live box rip on A Pack A Day. Nathan was a former first round pick of the Athletics, but ended up in the minors for ten years before he made is debut last year. Unfortunately with the addition of Torii Hunter, Nathan is falling way back on the Angels' depth chart and will have to fight hard for a job. Nathan's signature is really tight and looks good on this card even though there is only a tiny space for the player to autograph. 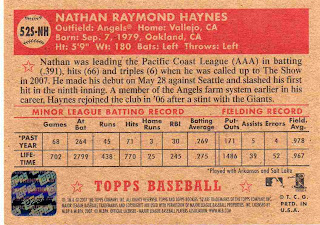