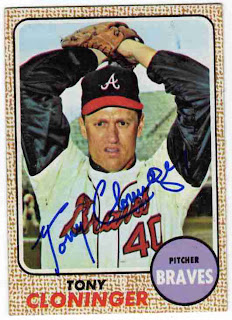 Who is this? Braves pitcher Tony Cloninger.

Why is this so special? This is an autograph from Tony on a 1968 Topps card, the year the long time Brave was traded to Cincinnati. Tony is best known for hitting two grand slams in a game against San Francisco. He still holds the record for most RBIs in a game for an Atlanta Braves player. Tony also had the bad fortune to go 24-11 the same year Sandy Koufax went 26-8. No Cy Young votes for Tony. Cloninger also holds the distinction of getting the opening day start for the first game the Braves played in Atlanta on April 12, 1966. He took the loss after giving up a two-run home run to Willie Stargell in the 13th inning. This is a very nice looking autograph on a vintage Topps card. 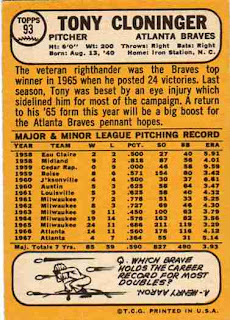 A pitcher hit 2 grand slams? Why did they not convert him to the field like the Babe?