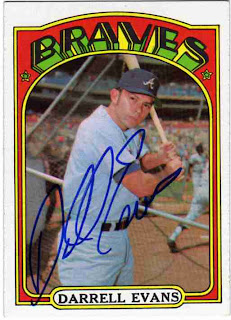 Who is this? Braves third baseman Darrell Evans.

Why is this so special? I've been looking for an auto of Darrell for a long time. I actually bought one about 8 years ago from a dealer in Utah, but it was missing from the package that was sent. This one is a nice example of his looping signature. A rule V pick for Atlanta in 1969, Darrell worked with Eddie Mathews to become an excellent fielding third baseman. In 1973 Darrell, along with Hank Aaron and Davey Johnson, became the first three teammates to hit over 40 home runs in a season. Darrell set another first with the Tigers in 1985 when he became the first player to hit 40 home runs in both leagues. Bill James considers him one of the most underrated players in history due to his defense, power and high on base percentage. Darrell played one last season with Atlanta in 1989 before retiring. 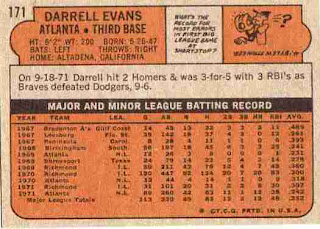 You posting these cards has made me make plans to go to Reds Fest next Winter so I can try and score some good autos. This is great that you were able to get these.