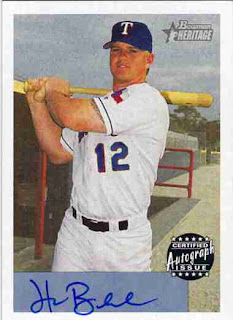 Who is this? Rangers third basemen Hank Blalock.

What is this? An autograph card from 2002 Bowman Heritage, card BHA-HB

How much did it cost? Three bucks for the pack.

Why is this so special? This is the first auto I pulled from a Heritage product. It's a nice feeling to open a pack and see that blue ink. Blalock was still a prospect when this card came out. The following year he hit the game winning home run off Eric Gagne in the All Star game. Costing Andruw Jones the MVP and John Smoltz a save opportunity. Grrrr. Blalock has had a couple of rough years recently, but could have a comeback season after an injury-filled 2007. The auto is nice, but doesn't look much like Hank Blalock. The H looks like the astronomical symbol for Jupiter and the last name is clearly Bee. Jupiter Bee sounds like a bad 60's cartoon. I don't know where I'm going with this. 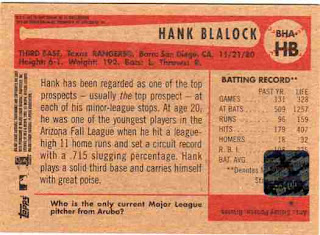 You were going downhill. Way to stop.