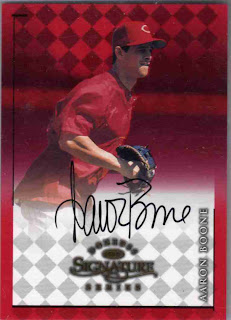 Who is this? Reds third baseman Aaron Boone.

What is this? An autograph card from 1998 Donruss Signature.

Where'd I get it? A card show at the now defunct Venture Mall in Gwinnett.

How much did it cost? I got a handful of autograph cards from a dealer for about 20 bucks.

Why is this so special? This was the last product Donruss released before going belly up in 1998. Aaron spent most of his career with the Reds, but is best remembered for one at bat with the Yankees. He spent only 54 games with that team before screwing up his knee in the offseason and missing all of 2004. He has a couple of lackluster seasons for Cleveland before becoming a role player for the Marlins last year. He signed with the Nationals this winter and will come off the bench for them in 2008. This card is being sent to Joe of Cincinnati Reds Cards to complete a trade for tomorrow's autograph card. This was an excellent signature set, and Aaron's auto looks nice on the card. 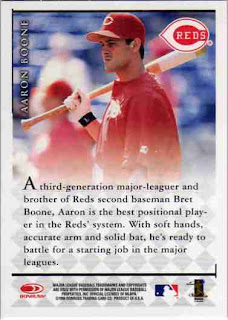 That is a nice looking signature. Thanks for the add of it to the trade.