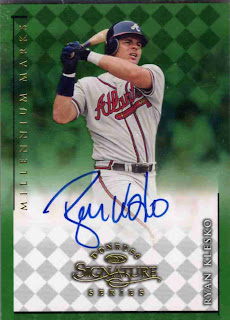 Who is this? Braves outfielder Ryan Klesko.

What is this? An autograph card from 1998 Donruss Signature Millenium Marks, numbered 1032.

Where'd I get it? Received in a trade with Cincinnati Reds Cards.

How much did it cost? Received in trade.

Why is this so special? Klesko was one of the big group of Braves Rookies that panned out in the early nineties along with Chipper, Javy and others. He was a slugging first baseman/outfielder that was better with the bat than the glove early on. He got in Bobby's doghouse frequently which is why he had a hard time holding down a full time job until he left the Braves. Klesko is prominently featured on the Sports Illustrated cover for the 1995 World Series, which is apparently not as Iconic as I thought since I can't find it online anywhere. He was traded to the Padres after the 1999 season for Wally Joyner, Reggie Sanders and Quilvio Veras, none of which had even close to the impact that Klesko had with the Padres. Ryan Played for the Giants last year where he was Barry Bonds' hunting partner, oddly enough. Ryan is currently a free agent and has not signed for 2008. This is the Millennium Green version of Donruss Signature, which according to SCD the first 100 signed were blue, the next 1000 were green and all the rest were Red. This is actually his most common colored signature from the set, as he signed only 1500 total cards (100 blue, 400 red). The card and auto both look great. This came in a group of cards from Joe at Cincinnatti Reds Cards. 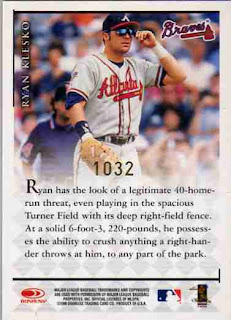 His high was 34 in 1996. He also hit 30 for the Padres in 2000. The past few years he was playing in Petco which is a terrible home run park and he's just getting older. I don't think he ever juiced though, he's a laid back surfer type like Zito and if you compare his 2003 and 2004 totals he actually did better in 2004 once testing started. He had more extra base hits and a higher average, it's just a lot of his homers turned into doubles. The last few years have been full of injuries though.

I wasn't hinting on the Juice. I just thought he was such a cool player who kind of fell off the map.