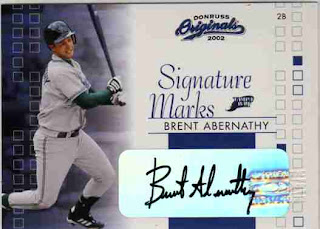 Where'd I get it? A pack bought at the local Wal-Mart.

How much did it cost? However much a pack of Originals cost. Two or three bucks I think.

Why is this so special? Brent didn't have a heck of a lot of success in the majors, but this is still kind of a cool card. Brent is an Atlanta native and went to high school at Lovett High, which is close to where I live. He was a member of the 2000 Olympic Gold Medal team in Sydney. He had a decent debut for the Devil Rays in 2001, a not so good follow up year in 2002 and has bounced around many organizations since then. His 2001 performance netted him a lot of rookie and autograph cards in 2002. This card sums up the disappointing Donruss Originals set pretty well. It's a great looking signature on a nice looking card, plus it's even serial numbered, but it's still Brent Abernathy. I was really excited when I originally pulled this card though, so I like it anyway. Brent is currently in the Nationals organization and played for the Columbus Clippers last season. Brent even pitched a couple of games for the Clippers. Pete Orr better watch his back. 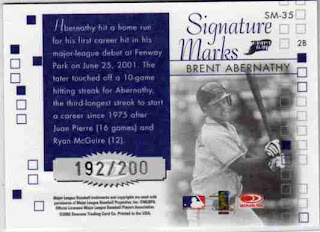 Good looking card. I wish they would get away from the stickers and get back to autographing the actual card. Of course it doesn't matter to me because I never pull one anyways.