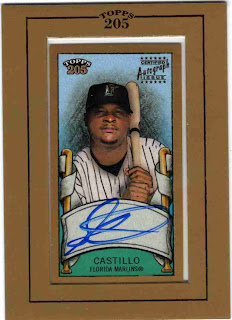 Who is this? Marlins second baseman Luis Castillo.

What is this? An autograph card from 2003 Topps205 Second Series, card TA-LC.

Where'd I get it? Not sure, actually. The local flea market perhaps.

How much did it cost? Probably not much.

Why is this so special? Castillo is a former all-star second baseman, although his production has declined in recent years. This card is notable for a complete disaster of an autograph from a player who normally has a very nice one. Mini cards can be hard to sign, but this is ridiculous. Castillo recently signed a 4 year contract with the Mets and will most likely be their opening day starter at second base. 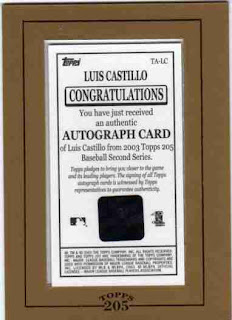 How in the hell did a TinyUrl lead me to this place? Anyways, I can tell you from, uh, experience....Castillo is a hard last name to spell.

Maybe he was just being lazy, kind of how he is as a player these days.