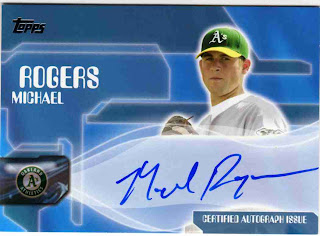 Who is this? Oakland pitching prospect Michael Rogers.

How much did it cost? A couple bucks for the pack.

Why is this so special? Michael was the A's second round pick on the 2004 draft. He was a very good starter at N.C. State, but has had big problems in the minors the past couple of years. Finding good information on minor league players who aren't top 10 prospects is a real pain in the keister. What little info there is seems to be locked behind insider subscription sites. His most recent news on Scout.com has the ominous headline "The Oakland A's have released five minor league players." plus his Rotowire profile shows him as a member of the Twins organization. Rotowire seems fishy though, they have his age and throwing arm wrong. Wherever he pitches next year it probably won't be in the majors, but he's still young enough to have a chance to make the show one day. It's a longshot though. The signature is clean, but a little scribbly. 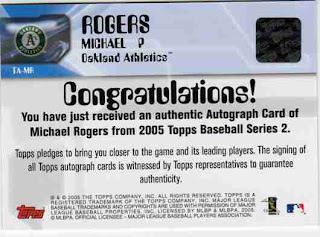