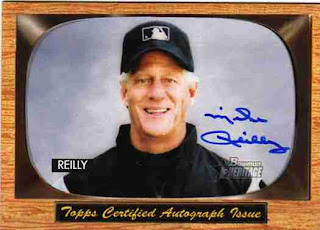 Who is this? MLB Umpire Mike Reilly.

What is this? An autograph card from 2004 Bowman Heritage, card SA-MR.

Why is this so special? Well if nothing else it's unique. In 1955, Bowman added cards of umpires to their high series cards. Kids despised them and threw them out, burned them, tore them to shreds and generally desecrated them in droves. As a result, they are quite scarce and expensive, even if people still don't want them. Oddly enough, Bowman was out of business the next year after getting bought out by Topps. In The Bowman Heritage set that used the 1955 design, Topps once again inserted umpires into the checklist. They also went one step further and had the umpires autograph cards as well. While interesting, it is still kind of a downer to have your one a box auto hit end up being a dirty ump. Boooooo! Kill da ump! Actually, Mike looks like quite a jolly and friendly fellow from the picture on his card. His signature is also a rare combination of being distinctive yet readable. The angle of Mike's auto indicates that he could be a lefty. Why isn't there a throws L/R stat on his card? Umps throw the ball to the mound, it's important to know these things. He's also active with the Big Brothers/Big Sisters charity. Well dang, I can't hate a nice fellow with such a great autograph even if he is a rotten blind umpire! Thank goodness there are three other umps on the field to hate. BOOOOOO! 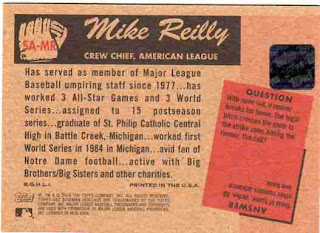 In the 1955 Bowman set, the manufacturers listed the umpires' ancestry on the reverse of some of their cards (Paparella - Italian, Stevens - Slovak, Honochick - Czech). What kind of a reaction would there have been if Topps tried that in 2004?