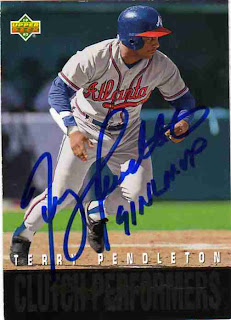 Who is this? Braves third baseman Terry Pendleton.

What is this? An autographed 1993 Upper Deck Clutch Performers card, number R16.

How much did it cost? Eight dollars.

Why is this so special? I found this looking through a box of Braves autographs hoping to find some two-dollar bargains. After finding nothing of interest in the first row of the box, this card was the first one in the second row and I knew this autograph was much better than getting a handful of no-names. The autograph is gorgeous and has the 91 NL MVP inscription on a nice insert from 1993 Upper Deck. A few years ago Terry was vilified by some for "stealing" the MVP award from Barry Bonds in 1991. Times have changed. Terry is currently the hitting coach for the Braves and is considered to be a top managerial prospect. Terry is the heir apparent to Bobby Cox in Atlanta, assuming Bobby ever retires. 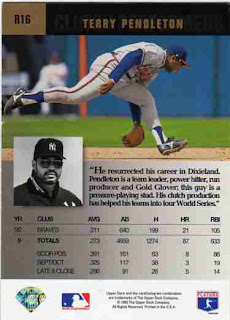