Who is this? Braves infielder Denis Menke.

Why is this so special? I love obscure players from the fifties and sixties, doubly so when they are Braves. This is a pretty nice looking auto on a great looking '65 Topps card. Menke was an OK shortstop for the Braves before he was traded to the Astros and became an All Star. Denis had a career year in 1964 when he hit twenty homers for the Braves, but his most amazing statistical year was 1973 when he had 23 more walks than hits. My grandfather had a habit of calling Mark Lemke "Denis Menke" for some reason. 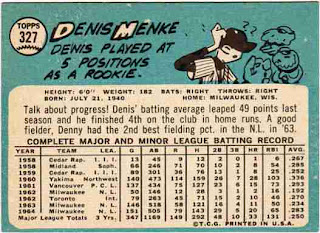