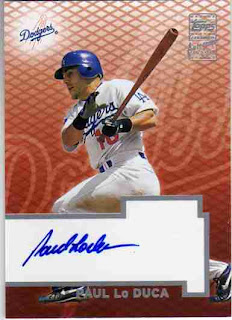 What is this? An autograph card from 2003 Topps, TA-PL

How much did it cost? Two bucks for the retail pack.

Why is this so special? I actually remember exactly when I got this pack. I was going to visit a friend who lived on the other side of town. He bought a house in the neighborhood where I grew up and this was the first time I had been back in a while. A Target had been built a short way away after I had left. I went in to check it out and get a couple of things I needed. I got a couple of packs of Topps and this card was inside one of them. My reaction was "Yeah, an Auto! No! I already have LoDuca!"I'm not sure what the odds of pulling two autographs of the same player from two separate products within a few weeks time is, but I managed to do it. Paul either has a very tight, nervous signature or his hand got used to signing all those Topps205 cards and it cramped up the rest of the autos he had to sign. It's still a good looking card though, I kind of like it best out of the two. 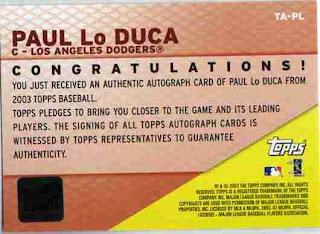