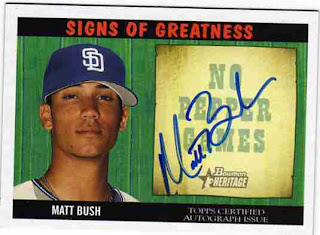 Who is this? Padres shortstop prospect Matt Bush.

What is this? An autograph card from 2005 Bowman Heritage, card SG-MB.

Where'd I get it? This was the auto hit from a box of Bowman Heritage.

How much did it cost? Threeish dollars.

Why is this so special? Matt was the number one overall pick in the 2004 MLB draft. Matt was taken by the Padres over such players as Justin Verlander, Stephen Drew, Jared Weaver, Huston Street, Yovani Gallardo and Dustin Pedroia. Matt went to Mission Bay High School in San Diego, and was chosen for his local ties and for the fact he would not demand as high a signing bonus as other picks. Right after signing, Matt was suspended by the Padres for fighting outside a nightclub. Matt never developed offensively, but was converted into a pitcher in 2007 and hit 95 on the radar gun. Before the year was out he had an appointment for Tommy John surgery. Bush is not the first number one overall pick to have major problems early in his career. Matt is still young and will likely be back in the minors pitching by 2009. The 2005 Bowman Heritage autograph design is one of my favorites, and Matt's signature is pretty good looking even if the Bush goes sort of weird toward the end. I am also a fan of the huge Charlie Brown hat Matt chose to wear for the picture. 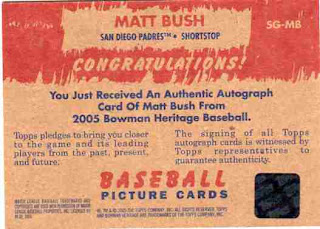 I remember hearing about him getting into trouble and I lost track of him. I need to get me a hat like that.

I was wondering what happened to him. He was on everything Bowman a few years ago.

What a nice signature he has.
Is he ever going to be a full-time player?

He probably won't play at all in 2008, but Tommy John surgery tends to help young pitchers assuming they heal properly. Since he's a first overall pick you have to think the Padres will give him every opportunity to make the bigs. Especially since they passed up on some very nice players because they were being cheap. If he never makes the bigs the Padres organization as a whole loses some major face.

I'm not sure if there's ever been a #1 pick that never made the majors. I'm sure there is one, and I'm also sure that someone out there knows it and will post it here. I'm too busy writing up a pack bust at the moment.

Steve Chilcott and Brien Taylor are the only number-one picks in the baseball draft to retire without ever reaching the major leagues. Droppn' the 411 on ya. Steve had 6 years in the minors as a catcher and quit. Brien had that arm injury in a fight and was never the same.