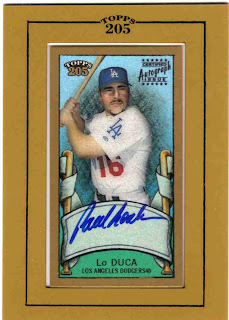 How much did it cost? One twenty fourth the price of the box, which I can't remember.

Why is this so special? Topps205 is one of my favorite sets, this is one of three autos I have from that product. I like the mini card in a frame concept as well. Paul LoDuca is an all-star caliber catcher even though he played for some of my not-so favorite teams. He did a really good job squinching his autograph on the tiny card without making it illegible, although it's a bit outside the lines. LoDuca signed with the Washington Nationals this offseason. 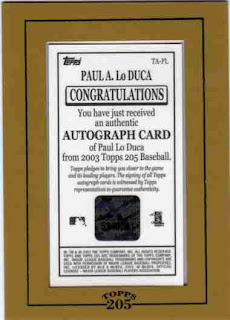 I'd never seen those cards before. I like this blog, too. Good job.