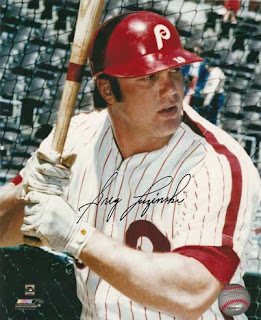 Who is this? former Philadelphia Phillies slugger Greg Luzinski

What is this? An autographed 8x10 photo

Where'd I get it? at Bull's BBQ in Citizens Bank Park

Why is this so special? Greg "The Bull" Luzinski was a star for the Phillies for most of the 1970s and earned a World Series ring as part of their 1980 championship team. He was a 4-time all-star and he retired with over 300 home runs and 1000 RBI.

Luzinski opened Bull's BBQ at the Citizens Bank Park in Philadelphia, and can usually be found there signing autographs for fans. I didn't expect him to be on hand for the exhibition games this weekend, or I would have brought a card to get signed. Fortunately, there was a stand with various Bull's BBQ souvenirs, including some 8x10 photos.

Luzinski has a very nice, clear autograph. You can really tell that penmanship used to be a big deal when you see the signatures of older former players.
Posted by Paul Hadsall at 8:08 PM