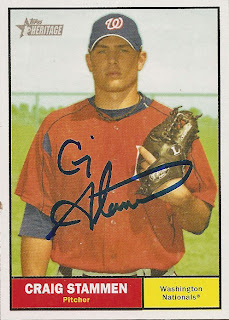 Who is this? Washington Nationals pitcher Craig Stammen


What is this? An autograph card from the 2010 Topps Heritage set

Where'd I get it? I wrote to Stammen a couple of weeks ago and asked him to sign it. I got it back on Monday.

How much did it cost? About $1 for the card plus postage

Why is this so special? Craig Stammen is a talented young starting pitcher for the Washington Nationals. He didn't have a great rookie season in 2009, but he showed flashes of potential.

After getting knocked out in the second inning against the Philadelphia Phillies on April 14, Stammen rebounded with a pair of strong starts against the Colorado Rockies and Los Angeles Dodgers. He'll face Ricky Nolasco and the Florida Marlins on Friday.

The way Stammen signed his first name, it almost looks like he wants to go by "CJ." His last name is pretty legible, though.
Posted by Paul Hadsall at 8:11 AM