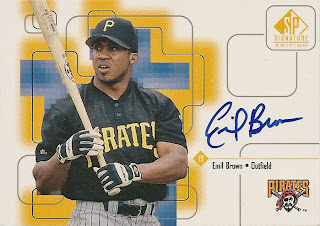 Who is this? Emil Brown, a former Major League outfielder who played for the Pittsburgh Pirates in the late 1990s

What is this? An autographed card from the 1999 Upper Deck SP Signature insert set

How much did it cost? $2, less than the one I lost on eBay a few months ago.

Why is this so special? Brown was a Met for about a week last season, so I needed his autograph for my collection. This is his only certified autograph card. He's got a relatively clean signature. Unlike many later Upper Deck issues, this one is signed on the card, not a sticker.

He was on the A's for a while too.

I have a Dee Brown card from that set and I must say that the autograph cards look good.