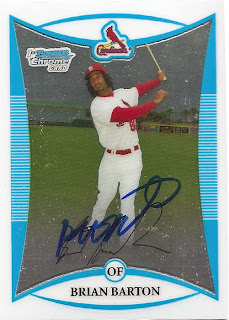 Who is this? Former St. Louis Cardinals outfielder Brian Barton

What is this? An autographed card from the 2008 Bowman Chrome set

Where'd I get it? Barton signed it for me before today's exhibition game between the Bridgeport Bluefish and Newark Bears

How much did it cost? I'm not sure where I got the card

Why is this so special? Brian Barton came up through the Cleveland Indians system, but he didn't make it to the big leagues with them. He was selected in the Rule V draft by the St. Louis Cardinals following the 2007 season.

Barton spent 2008 in the majors, hitting .268 with two home runs and 13 RBI in limited duty. He was traded to Atlanta in 2009, but spent most of the year in the minors.  This year, he was in spring training with the Dodgers, but he got released at the end of March. He's currently a member of the Bridgeport Bluefish in the independent Atlantic League of Professional Baseball.

Barton's signature isn't all that pretty, but I can't complain about penmanship when a player stops to sign before a game. Besides, it doesn't look much sloppier than the facsimile signature printed on the card.
Posted by Paul Hadsall at 7:16 PM

It's crazy how quickly some guys can go from the Majors to the indys. I wonder how much the Rule V draft stunted his growth.

I can't believe that you guys are starting up games out there. The American Association and Northern League are still about a month away from starting.

Opening Day is Thursday, and I bought my ticket today.

It always amazes me, but it seems like every year there's at least one guy in the current year's Bowman set who's already in the Atlantic League by the time his card comes out.

I remember Brian. Atlanta got him from St Lou for Blaine Boyer (RP)
Brian got in one game, entered as a pinch runner, got caught stealing, and played the final two innings in right field, catching one ball.
That was it. He was gone the next day....