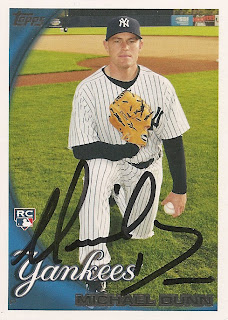 Who is this? Michael Dunn, a pitcher for the Atlanta Braves

What is this? An autographed card from the 2010 Topps set... I think it's the first regular 2010 card posted on this blog.

Where'd I get it? I wrote to Dunn at the Braves spring training camp and asked him to sign it; I got it back this week

How much did it cost? About a dollar, between the card and postage.

Why is this so special? When I pulled this card out of a pack, I recognized Dunn's name from last year's Trenton Thunder team. He had a good year, moved up to AAA and got to make his big league debut for the Yankees in September.

During the off-season, Dunn was traded to the Atlanta Braves with Melky Cabrera for Javier Vasquez.

Dunn began his professional career as an outfielder, but didn't switch to pitching until the 2006 season.

He's got an interesting stylized autograph, and you can still almost still read a few of the letters. I wonder what it will look like in a couple more years.
Posted by Paul Hadsall at 11:29 PM