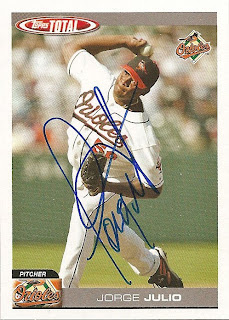 Who is this? Former Baltimore Orioles closer Jorge Julio

What is this? An autographed card from the 2004 Topps Total set

Where'd I get it? I got it signed before Sunday's exhibition game between the Newark Bears and Bridgeport Bluefish

How much did it cost? The card came out of a Topps Total pack purchased in 2004.

Why is this so special? For three years, Jorge Julio was the closer for the Baltimore Orioles. In 2003, he saved a career high 36 games and he has a total of 99 saves to his credit over a nine year major league career.

Julio has pitched for 8 different major league teams, most recently the Milwaukee Brewers in 2009. This season, he'll start the year pitching out of the bullpen for the Bridgeport Bluefish in the independent Atlantic League of Professional Baseball.

I've never managed to figure out Julio's signature, but he does take time to sign it carefully.
Posted by Paul Hadsall at 12:23 AM

I can see the Jorge pretty well but I don't know where it goes after that. Does he seem like a good signer so far? I might try to go to a few games in York this year.

He was patiently signing one or two for everybody on Sunday, but I don't know how long that will last once the season is underway.