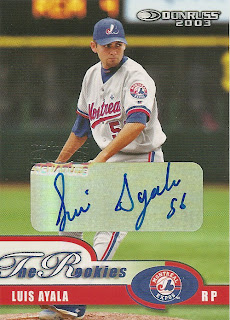 Who is this? Albuquerque Isotopes' pitcher Luis Ayala

What is this? An autograph insert card from the 2003 Donruss The Rookies set

Why is this so special? For a few seasons, Luis Ayala formed half of an imposing tandem in the Montreal Expos/Washington Nationals' bullpen. Then he injured his arm during the 2006 World Baseball Classic and missed the whole season after having Tommy John surgery. He was never quite the same afterwards.

The Mets acquired Ayala with the hopes that he could fill in for injured closer Billy Wagner late in the 2008 season. He did his best, but he wasn't up to the job. Ayala gave up the last run ever at Shea Stadium, an eighth inning home run to Dan Uggla on Sept. 28, 2008.

Ayala has a pretty nice looking autograph, but I've never seen anyone else make an "A" quite like that.
Posted by Paul Hadsall at 10:35 PM