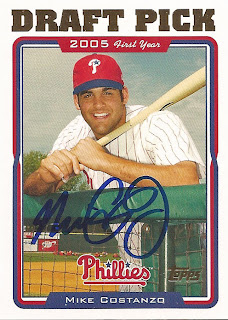 Who is this? Mike Costanzo, third baseman for the Camden Riversharks


What is this? An autographed card from the 2005 Topps Update & Highlights set

Where'd I get it? I got it signed before the opening night game between the Camden Riversharks and Newark Bears last week.

How much did it cost? I probably got the card out of a pack.

Why is this so special? Costanzo was the 65th player selected in the 2005 amateur draft and was once regarded as a top prospect by both the Phillies and the Astros. He has been part of trades for Brad Lidge and Miguel Tejada, and he represented Italy in the 2009 World Baseball Classic.

Unfortunately, his plate discipline has left a lot to be desired. For his career, he's averaged over a strikeout per game. That's probably why he's playing for the Riversharks this year.

Costanzo was fairly friendly when I asked him to sign the card, so I wished him luck. His second at bat of the game, he hit a grand slam. Oops. :)

He has a pretty nice signature for a modern player.
Posted by Paul Hadsall at 4:11 PM

Had season Phils tickets next to some family member of his a few yrs ago (prior to him becoming a Phil) bummer to find out he is no longer associated with a major lg team.

hopefully he will hook back up.