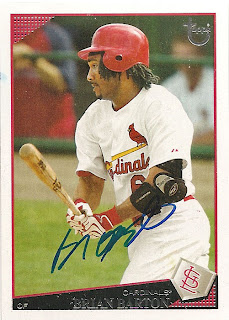 Who is this? Former Cardinals outfielder Brian Barton


What is this? An autograph card from the 2009 Topps set

Where'd I get it? This is the second card that Barton signed for me before an exhibition game between the Bridgeport Bluefish and Newark Bears on April 18th.

How much did it cost? The card came out of a blaster purchased at Target last year.

Why is this so special? I already wrote about Barton when I posted the other card I got signed, so I won't repeat that here.

Observant card collectors might notice that the card Barton signed is not from the regular Topps set. It's one of the variant editions produced for Target last year, printed on traditional cardboard cardstock and utilizing the classic Topps logo.

I originally thought this was s fun parallel set to try to collect. For Series I, Topps shipped full blasters of the variant cards. They had their own UPC code so you could easily find them if you were looking. My memory is a bit fuzzy a year later, but I think I spent between $80-$100 on them.

Series II came out with the same parallels, but there was a change in the program. Instead of getting a full blaster of the exclusive special cards, you only got two packs. At $1 per card, it was no longer a fun collecting project -- it was a huge money sink. I didn't buy any. The parallels continued into Series III, officially known as Topps Update & Highlights. I shudder to think how much someone would have to spend to put that whole set together.

Barton's signature still isn't very pretty, but I think it looks better on a card where it's not on top of a pre-printed facsimile autograph.
Posted by Paul Hadsall at 11:40 PM