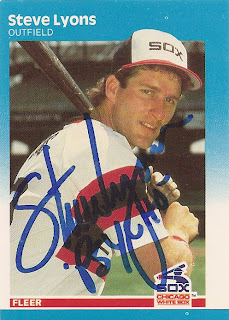 Who is this? Steve Lyons, a 1980s utility player who spent most of his career with the Chicago White Sox

What is this? An autographed card from the 1987 Fleer set

Where'd I get it? I wrote to Lyons and asked him to sign it last month; I got it back last week

How much did it cost? About a dollar for the card and postage

Why is this so special? Lyons spent nine years in the major leagues, but he's best remembered for one play -- when he unbuckled his pants to get the dirt out while standing on first base.


I also remember a This Week in Baseball feature that highlighted his versatility -- he once played every position in an exhibition game. After Lyons ended his playing career, he became a broadcaster.

I think it's neat that Lyons included his nickname "Psycho" when he signed the card. I don't know how he came by that nickname, and I'm not quite sure that I want to. :)
Posted by Paul Hadsall at 11:27 PM

Same here, I think I've seen that video 439 times over the years...