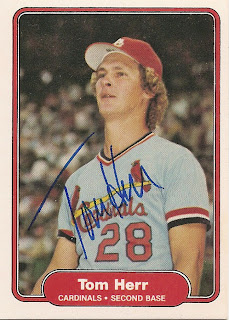 What is this? An autographed card from the 1982 Fleer set

Where'd I get it? I got it signed before Wednesday's doubleheader between the Lancaster Barnstormers and Newark Bears

How much did it cost? I'm not sure where I picked up this card

Why is this so special? You've got to love those old 1982 Fleer cards. Tommy Herr was lucky because the photo on his card is actually in focus, even though it's not a great shot.

Herr was a Cardinal for 10 seasons. He went to three World Series with them, earning a ring in 1982. He represented the National League in the 1985 All-Star Game, and he was the last National League player to drive in 100 runs while finishing the season with fewer than 10 home runs.

After he retired from baseball, Herr became the first manager of the Lancaster Barnstormers.  He led them to their only Atlantic League championship in 2006. Herr then left the team to manage the Hagerstown Suns in 2007. Last season, he returned to the Barnstormers as the team's bench coach. This season, Herr is filling out the Lancaster lineup card again.

Tom Herr comes from the era when players still had legible autographs.
Posted by Paul Hadsall at 10:51 PM

You are making me anxious for the Wingnut season to start. I hope that I do as well there as you are doing now.

It should be relatively easy to come away with a half-dozen or dozen autographs at an Atlantic League game. At least half the roster and most of the coaches will have cards, and most teams encourage the players to accommodate reasonable autograph requests as part of a fan-friendliness policy.

From what I remember about American Association rosters, you'll have a harder time finding cards to get signed.