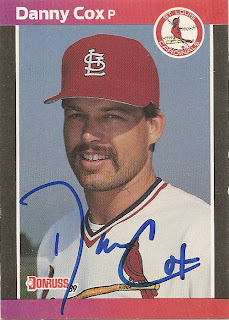 Who is this? Former St. Louis Cardinals pitcher Danny Cox

What is this? An autograph card from the 1989 Donruss set

Where'd I get it? I got it signed before yesterday's doubleheader between the Lancaster Barnstormers and the Newark Bears.

How much did it cost? No idea where I picked up the card

After he retired, Cox managed the Gateway Grizzlies in the Frontier League for three seasons. He is currently the pitching coach for the Lancaster Barnstormers in the Atlantic League. And he still has that great mustache. :)

Cox doesn't have the prettiest signature, but it's fairly legible.
Posted by Paul Hadsall at 11:36 PM